The Fighting Stance As Chess

Posted on December 5, 2011 by ignosympathnoramus

Fighting is often referred to as “human Chess,” or “kinetic Chess” in MMA circles. This comparison with Chess is supposed to highlight the fact that fighting is very technical and can be very “cerebral,” but is most often used in reference to jiu-jitsu or the grappling arts to highlight that every move has a counter, which has a counter, which has a counter, ad infinitum. The chess analogy is actually quite good. In both Chess and in fighting, for instance, an offense is also a defense, and vice verca. In both games one always has at least one opening, as does his opponent, except at the very beginning of the match, before the opponents have closed distance to within fighting range. Both games involve gambits or “sacrifice” moves whose success hinges on the number of moves ahead one has kept in mind. There is no “perfect” defense, but there are “optimal” ones. In fighting, the “optimal” defense begins and ends with your fighting stance and Chess provides a perfect metaphor for understanding the essentials of the optimal fighting stance. Luckily, with the fighting stance, as opposed to the Chess defense, one can launch the entire defense in one move, as depicted below. 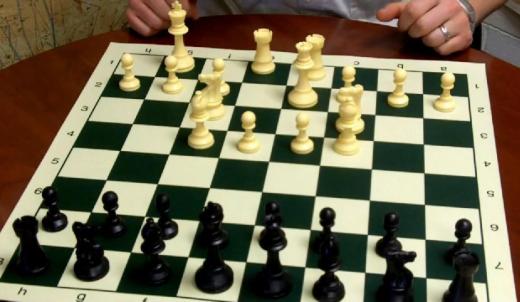 A Chess defense is mounted mostly by protecting certain positions with redundancies; that is, with more than one attacking piece. Similarly, one’s offense is often mounted with the use of such redundancies, allowing “sacrifices” of some pieces that are redundantly covered by others. One’s command of the board is determined by how many squares one is “covering,” as well as how many times over each is covered. This is precisely how you should think about your fighting stance. Your body has certain vital squares that need to be protected redundantly from multiple lines of attack. When you keep your elbows close to your ribs, for instance, you not only protect your ribs from the hooking angle, but also your ribs and solo plexus from the low-line straight. You get to cover two positions with one piece, so to speak. Furthermore, once one of these shots has been blocked, that same blocking arm is chambered perfectly for an upper cut, with your fist now closer to your opponents face than his own fist on that side.

Of course, one should not let one’s opponent dictate the initiative by passively absorbing shots like this, but should instead launch one’s own attacks with this same system of redundancies in mind. Although throwing a punch or kick usually exposes more openings than staying tucked into one’s fighting stance, these strikes also cover at least one line that was less covered in the fighting stance. One of the advantages of the JKD lead straight, for instance, is that both the uppercut line and the low straight line are being mostly cut off to your opponent while your punch is in flight, opening up only after your punch begins to straighten out and make impact. Furthermore, a straight will always beat a hook in terms of speed, allowing you to thrown the lead straight without worrying as much about the hook line, until after your shot lands, at which point your lead shoulder should be covering your chin anyway. This will not stop a hook from glancing off of your temple, of course, and this is partly my point: that every shot fired is a gamble. However, just as in Chess, this gamble can be hedged so as to minimize risk. For instance, many boxers and kickboxers are willing to accept the gamble of eating a jab or two to land that heavy overhand or hook. This makes sense with gloves on. The genius of the JKD lead straight is that it simply offers a better gamble: one that perfectly checks the former strategy. The boxer or kickboxer who takes this gamble will have to accept the fact that his hook or overhand will at best glance the temple or forehead, and only after the lead straight has found its mark; a punch far heavier than a standard boxing jab. Even if the lead straight misses this mark and hits the opponent in his chest, this will still take an enormous amount of steam off of his counter. Being first is everything! Furthermore, if your opponent ducks down for a shot he will run into your forearm or elbow, which have traveled straight from your own ribs towards your opponent. Thus, you essentially end up with one side of a muay thai clinch, with your elbow and forearm across your opponents clavicle, further protecting you against an accidental or intentional head butt. Therefore, one does not need total certainty regarding the outcome of one’s attack; one simply needs to know how many potential counters are checked as well as how many potential follow-up shots of one’s own are subsequently left open. This beautiful system of checks and balances all starts with the stance, however. The JKD lead straight is like your queen: fast, nimble, and powerful. Throwing this punch from a strong bijong is like covering your queen with offensive redundancies.

Another paradigmatic example of this is the JKD lead hook kick, which also starts from a strong bijong stance. The bijong is a perfect compromise between the sideways stance of Karate, which protects one’s groin area best, and the Muay Thai or squared-up MMA stance, which both sacrifice groin protection for easier use of the rear tools. In the bijong, the knee is slightly pointing inward at such an angle that a socker kick coming straight up the middle would not glance off of one’s inner loin and slide into one’s groin, as often happens in MMA competitions, but instead would hit one’s front knee.

Just lifting one’s front foot off of the ground a few inches completely negates the line exposing your groin to kicks. Even better, this “wedge” shape that is created is quite possibly the most redundantly defensive and offensive position one can take during a fight. Let’s count the defensive benefits: 1) leaning slightly backwards takes your chin out of “the pocket,” 2) the groin kick is negated, 3) the attack to your front shin is negated, 4) the rear elbow nearly connects with the front knee, protecting one entire side of the body against kicks and punches, 4) “cocking” your lead leg like this negates the Maui Thai kick to your front IT band and sciatic nerve, 5) while your lead elbow covers your liver and ribs, effectively covering the other half of your body. Lastly, 6) your lead hand is still blocking the straight line should your head not be entirely out of range. This leaves virtually no opening, save a sweep of your rear leg using a roundhouse, or possibly an overhand, both of which should be stopped by whatever attack your lead leg is by now throwing. This brings us to the offensive benefits of this “wedge:” 1) one can drop one’s knee heavily while blocking a round kick, acting as a limb destruction, throw a 2) low sidekick, 3) middle sidekick, or 4) high line sidekick, 5) a chasse kick, 6) a straight snap kick, 7) a JKD lead hook kick or Karate round-house, 8 ) a heel kick (reverse roundhouse in Karate), 9) an inverted kick, 10) an outside crescent kick, 11) a groin kick, 12) a knee to an opponent shooting for a takedown, and most importantly, 13) one is still chambered or “cocked” to throw the lead straight punch. Replacing one’s front foot with one’s rear as one raises the former in this “wedge” allows one to burst forward while well protected, all the while threatening with nearly a dozen potential offensive moves that all begin this way! This makes it nearly impossible for your opponent to judge whether he is even being attacked at all, let alone which of these twelve techniques is coming down range. Alternating between this burst forward and the lead straight punch, arguably the “bread and butter” of JKD, combines an extremely compact, protected structure with an enormous range of offensive attacks, while forcing your opponent to make the most difficult judgment in hand-to-hand combat: is the attack coming on the high line or low line? Rapidly switching between these two techniques further allows one to attack and retreat at the same time. That is, one can alternately withdraw either the head or low line targets from the engagement while simultaneously firing an attack from the opposing line on the vertical axis. Leaning back to get your head out of the way is just part of throwing a jeet tech or stop-hit to the opponents lead leg. Withdrawing your lead leg from a stop-hit thrown by your opponent allows you to sink your weight and throw an admittedly weaker lead punch, but into your opponents forward momentum. This bijong stance covers the most possible targets on your body while giving you access to the burst and lead straight punch, which also offer the best protection of any offensive techniques. Simply “seesawing” between these two offensive maneuvers will grant you the preemptive certainty that whatever gamble you decide to take, the risks have been maximally hedged against while sticking your opponent with the most difficult possible judgments to make regarding any gambit of his own.

This entry was posted in Martial Arts. Bookmark the permalink.